IBD: FROM PATHOPHYSIOLOGY TO PERSONALIZED MEDICINE 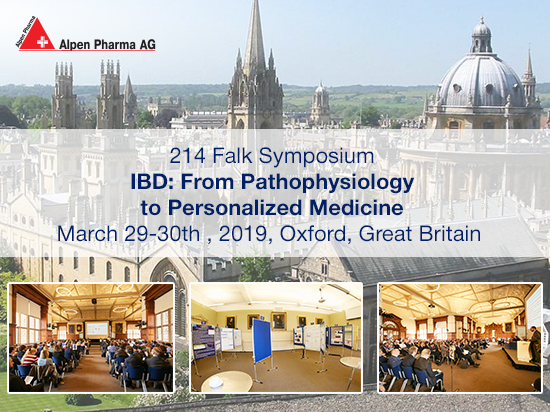 On March 29-30th, 2019, the 214th Falk Symposium “IBD: from pathophysiology to personalized medicine” was held in Oxford (UK). It was about the diagnosis and treatment of patients with inflammatory bowel diseases.

The symposium was held in the one of the oldest higher education institutions in the world – Oxford University. Leading world scientists in the field of gastroenterology were invited to participate with reports at the Symposium to present and discuss their latest observations and conclusions on the pathophysiology and therapy of IBD.

The 214th Symposium “IBD: from pathophysiology to personalized medicine” was aimed at finding a new understanding of the complex pathophysiology of IBD. In the first part of the Symposium, the role of genetic and environmental factors was discussed, as well as new factors influencing to the microbiota and the organism as a whole, which lead to the development of the disease.

Special attention was paid to the combined role of the microbiota and cells of the host organism, as well as the significance of the immune perception function in chronic intestinal inflammation. According to the organizers and speakers of the Symposium, a deeper understanding of the pathophysiology of IBD will make it possible to find approaches to new therapeutic strategies.

The Symposium discussed the role of both new and already well-known drugs, as well as concepts and indicators for individualization of therapeutic approaches and personalized medicine in IBD.

Traditionally, young researchers presented their own scientific data in the form of poster reports with the possibility of discussing the results with leading world experts in the study of intestinal diseases. Four of the best poster presentations were honored by the Falk Foundation, and the authors presented their works in the form of oral presentations in the scientific program of the Symposium along with renowned scientists.